...was born Sunday, February 21st, 2016 at 4:04 PM. Birth-mom Melanie called Sunday morning at 10:00 and said she had gone to the hospital for routine blood work before her induction and the nurses told her she was in labor. Clark and I got ready as quickly as possible, loaded the kids in the car and headed to Houston. We made it to the hospital by 3:50. Melanie had just reached 10 cm and was waiting to push until I got there. I held her hand, wiped her forehead, coached her through contractions and was able to watch as our son was born. It was an incredible experience. The grief and the joy were so intertwined. My heart broke in a million pieces for Melanie as she tried not to look at the baby or to hear his cries.At the same time, I was filled with love and joy at meeting my 9 pound 8 ounce bundle of joy. 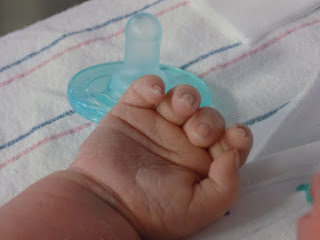 Clark and I were moved to a Nesting Room where we were able to get to know Titus. As I gave him his first feeding, I noticed he was breathing fast. I asked the nurse to check him, and she found he was running a fever. After only thirty minutes of being together, we moved to the nursery so Titus could be observed more carefully. During this time we met the birth-father and the birth-grandmother as they came to meet the baby boy. Initially the nurses thought Titus was just experiencing difficulty transitioning which can be pretty common among baby boys, but after four hours of watching him struggle to catch his breath, Titus was moved to the NICU.
The charge nurse that night was an amazing woman named Marissa who so sweetly helped me understand what all would be involved in the days ahead. We found out that Melanie had a fever as well, and so they thought Titus was just fighting off something similar. Titus was hooked to IV fluids, heart monitors and a pulse/ox monitor, and he was given a canula with a fast flow of oxygen to give his little lungs a break. It was bizarre seeing this big, healthy looking boy in a bed beside a 27 week preemie, but they were both struggling to catch their breath.

I was allowed to stay at the hospital in our Nesting Room, but it was very strange to sleep alone in a hospital bed with no baby to care for. Of course this was exactly what Melanie was doing just down the hall. I bumped into Melanie as I was leaving the NICU and she was being moved to recovery. She had heard Titus was sick, and she was very worried. I told her all that was going on, and I asked if she would want to go visit him with me in the morning. She said she would think about it. 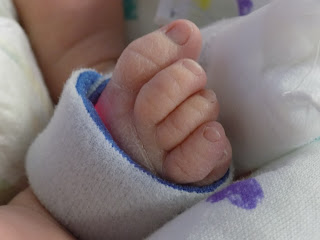 The next day, I saw Titus in the morning. A fabulous nurse named Michelle was caring for him that day. I went to Melanie's room to let her know how he was doing. We talked for a good while, and then she said she wanted to shower and get dressed and go see him with me. We went down to the NICU together around 10:00 Monday morning. Watching Melanie see our son for the first time was amazing and heartbreaking. I have a picture of the exact moment when she saw him. I look forward to showing it to Titus someday so he can see exactly how much his birth-mom loved him. With some encouragement from me and the nurse, Melanie sat and held Titus for about 10 minutes. It was beautiful watching her admire his tiny toes and his long fingers. She talked lovingly to him just as any mom would, but then, after Titus had fallen asleep, Melanie was ready to go. I walked with her back to her room. She told me she was so glad she had gone to see him, that she had been afraid it would be too hard, but then she realized it would have been harder to have never seen him at all. Melanie went to visit Titus in the NICU another time with me and then a few more times I noticed her name on the sign-in sheet.
Tuesday was Melanie's discharge day and our placement day. This was the hardest day for me. I did not know it was possible for a person to love a practical stranger so deeply. In the month since meeting Melanie, and then spending those days with her at the hospital, God put a love for her in my heart that is bigger than anything I could have ever imagined. Our social worker met with all of us and Clark and I sat beside Melanie on her hospital bed and told her how much we loved her, how much God loved her, and how we believe God had brought us together. We gave her a gift, a necklace with the February birthstone, and then our social worker told us it was time for us to go so Melanie could sign her paperwork. I hugged Melanie then, but when I pulled away I realized this could very well be the last time I ever saw her, and I hugged her again, tightly, trying to hold back tears and communicate how much we care for her and about her welfare. We left her room and walked into the hallway, and as soon as her door was shut, I fell against Clark, sobbing. When Melanie terminated her rights that afternoon, we received a son, but when she was discharged, I felt like I had lost a daughter. 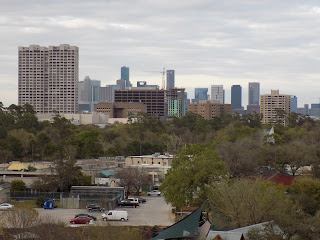 That day it seemed like Titus was getting better, but then all of a sudden, he got worse. His fever came back, his breathing became more rapid. Suddenly the doctor was saying things like Meningitis and possible malrotation of the bowel. Test results took time, and answers were slow in coming. After more days in the NICU and nights at the local Homewood Suites, Titus had a positive result on a Flu test and an inconclusive read on a barium test of his bowel. The transfer request was made by the neonatologist due to the possibility of needing surgery, and the Friday after Titus was born, he was transferred by ambulance to Children's Memorial Herman in the medcenter.
Clark brought the big kids to Houston for the weekend because they are my best Prozac. We had no idea how long Titus would be in the hospital. He had an entire team of doctors and nurses working to figure out what was wrong and to treat the symptoms as best they could. Test results trickled in and antibiotics were discontinued. The consensus eventually became Titus had the flu, and other than that, he was a strong, healthy, and really good baby. Clark and the kids left Sunday afternoon, and I went back to the NICU to hold my other baby.

Monday, when I went to the Medcenter, I planned to spend the morning with Titus, be there for doctor rounds, and then head back to Kingwood where I was staying to do laundry and spend time with friends. During rounds, the doctors said the magic word: "Discharge". Discharge?! US?! My son?! WE ARE GOING HOME!!!! I had set my expectations low, thinking we could be in Houston indefinitely, but now, I was going to get to take Titus home to meet his brother and sister, to start life as a family of five. I called my dad, and he lovingly agreed to drive with me back to DFW. We reached our living room at 1:something AM, and it has never felt so good to be home. All my chicks were finally in one nest.
Titus got to meet his big sister at 7:00 Monday morning. She was immediately smitten. Ransom met Titus at 8:00 AM Monday morning, and it's been difficult to get him to leave his side ever since.
There were so many signs of God's faithfulness and provision that I didn't go into. Clark and I had to continually lean into the Lord, and we were provided with such peace and comfort even when things were difficult or uncertain. God has continually proven himself trustworthy and kind, and I look forward to seeing the amazing plans He has in store for Titus in the years to come.